Strada is a UK chain of restaurants specialising in authentic food with Italian charm and friendly service. There are 14 Strada sites and 5 Coppa Clubs mostly in Southern England with one Strada Branch in Yorkshire.

Strada is a restaurant chain consisting of around 45 restaurants.

To support the strategic objectives of the Strada business going forward, the team at 25sevenIT (25SevenIT was acquired in 2018 by Timico), were tasked with moving the Strada core systems away from their existing IT infrastructure and into a new cloud-based infrastructure.

Critical systems and applications supporting the ongoing day-to-day business were evaluated, and the project aimed to migrate all of these to a Windows Azure platform whilst maintaining business continuity. This included the EPOS system and the business intelligence applications to enable continued data flow from restaurant to management.

The 25sevenIT team had six weeks to build, test and deploy the new Strada systems, prior to go-live.

Data was exported and migrated from the original infrastructure and user acceptance testing (UAT) was completed in preparation for go-live. The UAT focused on data integrity, restaurant access to systems and performance.

View more of our success stories 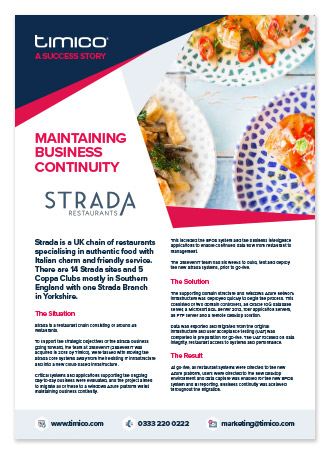