A family business based in London, Hobbs is a successful clothing and footwear chain. Since the first store opening in 1981, Hobbs ltd has become synonymous with contemporary British designer fashion.

IT systems at Hobbs needed remodelling to meet the fashion retailer’s ambitious expansion plans. Timico took a tailored approach, bringing together best-of-breed solutions to deliver a future-proof, scalable network that will match head office growth and keep stores at the cutting edge.

Hobbs’ relationship with its previous IT partner had worn pretty thin according to their IT manager, and after searching for a replacement, Timico and three similar-sized firms were shortlisted. “What stood out with Timico was the emphasis on engineering and technical skills,” he says. “They are very light on sales and call handling, and you always get through to someone who knows what they’re talking about straight away. I’m really impressed with the team’s technical ability.”

Timico secured a managed services contract for data infrastructure including switching, MPLS network and servers, while workstations are looked after by Hobbs’ in-house IT team. “Although we take care of a lot ourselves, it’s extremely valuable having someone to turn to,” he explains. “With Timico there’s no nonsense about what’s in the contract and they’ll always help us where they can, which is really refreshing compared to other providers we’ve worked with.”

According to the IT manager, existing systems at Hobbs were not future-proof or expandable and there were capacity and stability issues, with the network running too slowly, and storage and backup under strain. “We have a fairly ambitious expansion programme including more branches, head office growth and business intelligence systems to support retail analysis and better-targeted store openings. E-commerce is also a massive growth area.”

Hobbs really needed to address every aspect of its infrastructure, including new hardware, a faster network, more storage capacity and improved business continuity arrangements. “Although Timico was already running our managed services and MPLS, due diligence meant we had to consider other contenders seriously, and the comparison exercise was extremely useful,” he says. “Timico was neither the cheapest nor most expensive, but its proposal was certainly the most future-proof, and we felt this would deliver the best value over the longer term.”

A key element of the expansion plan was relocating Hobbs’ London head office, with Timico transferring all IT equipment and MPLS from Camden to Marylebone. “Considering what’s involved it went really smoothly,” he recalls. “We packed up on Friday and came in on Monday to our new offices with everything up and running. We couldn’t ask for more than that, and it was evident that Timico had gone the extra mile to ensure a smooth transition.”

Before the move, and prior to Timico taking on support, there was no central management or standard for drive mappings, so there were various combinations across the client PCs and an array of different links from Excel files to the old server. If Timico had simply provided new drive mappings, users would have been lost on the Monday morning, with none of the shortcuts, drive mappings or file links working. However, Timico set-up multiple client access points on the file server cluster which meant users were able to work as normal with absolutely no disruption. 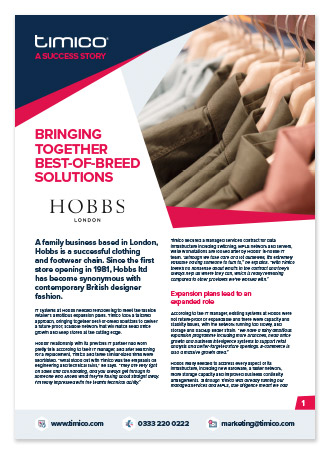 "What stood out with Timico was the emphasis on engineering and technical skills. They are very light on sales and call handling, and you always get through to someone who knows what they’re talking about straightaway. I’m really impressed with the team’s technical ability."

Timico recommended moving to server virtualisation to provide flexibility and tolerance, plus significant cost and space savings compared to the old setup. VMware vSphere 5 was specified for the virtual platform and for the back-end Timico recommended moving local storage to a shared system comprising a NetApp FAS2040 cluster. This enabled the use of VMware’s fault tolerance features and dynamically increased the amount of space available to Hobbs’ IT systems, as well as supporting almost instantaneous data backups.

Exchange 2010 is also more stable and features a Database Availability Group (DAG) which supports much higher fault tolerance, and auto-failover designed to withstand a mailbox server failure. Along with VMware Site Recovery Manager, these technologies all combine to give a much improved DR facility. And with data now replicated to a designated DR site, Hobbs has the peace of mind that in the event of any major incident, systems can be up and running again in a matter of hours.

New infrastructure is a design for life

As an expanding business, it was increasingly vital to have new IT systems in place and Hobbs now has what it needs to take the company forward. As well as being faster and more responsive to current needs, the infrastructure is highly scalable in terms of servers, processing power and storage, with no downtime.

At an enterprise level, the focus was on increased processing power, data security and business continuity but, as pointed out, the new infrastructure also delivers valuable enhancements in user functionality and capacity. “It makes everyone’s lives so much easier. For example, our clothing and footwear design teams regularly create large files and can now store enormous scans and images without having to purge the system every couple of months.”

The IT manager acknowledges that Timico has delivered a very high performing system. “We now have everything in place for a 21st-century business,” he says.

Having worked closely with Timico, Hobbs’ IT manager is complimentary about the team’s technical strength and professional approach and says he’s yet to find anything that fazes them. “For example, we run Prologic CIMS – a fashion business application – on a separate, private MPLS network, but we need carefully controlled access to it from our data network. With all the new architecture going in there were some difficulties getting connectivity between the two but Timico was very patient and co-operative, working really well with the other provider to resolve problems.”

Timico continues to look after Hobbs on a day-to-day basis, monitoring systems and performing periodic DR tests and is also working to roll-out laptops across UK stores. “This will integrate with our MPLS network and will also access a cloud-hosted intranet site that’s being developed in tandem, he says.”It’s a massive enhancement in communications as we’ve been relying on fax and post. Emailing items such as window display guides, rail guides and image books, instead of printing and posting them out 120 times, will give us huge savings on costs and materials and will keep stores much more up-to-date.”

While the technologies employed are all out there, the real innovation lies in how they’ve been combined. Rather than anything packaged, Timico’s bespoke approach is a result of understanding Hobbs and looking for the most efficient and effective mix of components to suit their systems and needs – without additional cost.

For example, the DR system comprises Exchange, VMware, NetApp, Windows clustering, and DFSR, brought together as a tailored solution to ensure the least amount of downtime and data loss, and to improve recovery time and recovery point objectives.

Other improvements are evident throughout the business. System stability and resilience have eliminated monthly server crashes and capacity upgrades have given people the space they need for emails and for shadow copies going back weeks, rather than retrieval from a tape restore. Users are reporting a much smoother experience, according to the IT manager, and the proof is in the lack of complaints. “We’re seeing far fewer cases where users are unable to accomplish tasks or have issues with loading and so on. It’s quiet on that front and we can focus valuable time on other projects.”

The business now has great confidence in its IT systems. “We’re in safe hands with Timico’s technical expertise,” he says. “We won’t need to play catch up again as they’re on top of everything and know the latest technology to keep us on track as the business grows."

View more of our success stories